Its head is an information resource, focused on improving your operations and technology.

Its body is a web development group specializing in websites built using the Drupal web platform..

We’ll work out the tail later…

The second day keynote was by Marissa Mayer, VP, Search and User Experience. It's amazing how much testing Google does on how it interacts with users. They'll test the amount of white space between the Google logo and search results. One thing they mentioned I think I knew but forgot is that when you do a search on Google it takes about 0.25 seconds and will have used between 700 and 1,500 computers in several data centers. When they asked users, the median number of results they wanted was 30, but when they tested changing from 10 to 30, the extra 0.1 second response actually caused people to do fewer searches! Marissa had some key take aways: have a healthy disrespect for the impossible, be scrappy--revel in constraints, and imagination is a muscle. (One cute side not, go to your Google Homepage and click on preferences, notice one of the language preferences is Elmer Fudd).

One of my favorite quotes from a breakout session was "Doing a 3 hour talk in 45 minutes requires the speaker to be over-caffeinated."

During the breakout session "Google Behind the Scenes," Jeff Dean described the evolution of Goolge's machines. In 1997 they were self assembling machines using cookie trays covered with cork for insulation. In 2000 they were in data centers, where the price was per square foot so they used racks as efficiently as possible. In 2001, a lot of dot com data centers went under so they could move out of and into a data center in 3 days. Currently they are back to caseless computers because they can cool them better. During the first year, a new cluster will have 1,000 machine failures and thousands of hard drive failures. They plan on losing 10 computers a day for each 10,000 computers in service.

Of course there was a lot of food. 3,500 pounds of candy. All the bags of salty snacks you could consume and coolers (as in the kind you see in convenience stores) full of water and drinks. 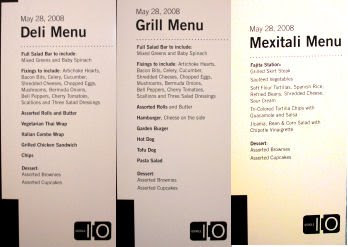