Its head is an information resource, focused on improving your operations and technology.

Its body is a web development group specializing in websites built using the Drupal web platform..

We’ll work out the tail later…

Not Your Father's Conference

The first thing I noticed were bean bag chairs, pool tables, foosball tables, etc. in the lobby outside the meeting rooms. And WiFi everywhere. I don't remember being at a conference with more notebook computers, and no one was having any problem getting on-line. Oh and the keynote speakers were wearing jeans and casual shirts. 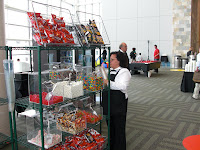 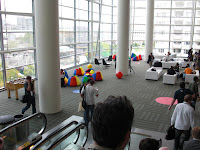 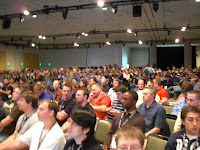 During the opening keynote, Vic Gundotra, VP, Engineering, outlined three key changes coming that will impact how we will interact with the web:

The other theme that caught my attention was "Innovate in the Open." A lot of Google's software development is done under open source licenses.

Vic acknowledged Amazon as a leader in cloud computing and introduced Google App Engine that lets you host apps on Google's infrastructure. The amazing thing is the starting level is free, and that includes 5,000,000 page views per month (and I think 500 GB of persistent storage). Using the App Engine allows an application to scale to millions of users without any modification.

One example was 2 Googler's creating an application to coordinate the information on Chinese survivors over the weekend after the earthquake.

Connectivity being pervasive was an acknowledgment that most US web users have high speed connections, that mobile speeds are improving (in Japan phones have data rates higher than cable here in the US), and connection speeds will only get better. Google showed off the Andriod, their open source phone that acts a lot like an iPhone, but is extensible and web oriented, especially via web applications.

Finally the client is more powerful. I've always wondered how iGoogle (if you haven't tried iGoogle as your home page, I strongly suggest it) allowed me to drag gadgets around inside the web browser--it's a lot of javascript and AJAX (programming and web services). With Gears, Google's local extensions, now your web browser has SQL databases.